When it comes to holiday-themed horror, the offerings are pretty hit or miss. There are gems to be found for sure, but too many of them seem to begin and end with the premise of “what if Santa was a murderer?” Amidst the candy cane stabbings and christmas light stranglings though, stands a work of true horror: Frosty the Snowman.

Now, I don’t mean the 1997 snowman slasher, Jack Frost, I’m talking about the classic — the song you sang along to on the radio or the special you watched a dozen times every December as a kid. There is a horror to Frosty the Snowman, and it is the most fundamentally human horror of all.

The inanimate given life is a staple of the horror genre; films like Child’s Play and Puppet Master inherently make our skin crawl by showing us life that shouldn’t be. But rarer are the pieces of the genre that examine the flip side of this trope — that all life is aberrant, and that to live at all is to face true horror. The tale of Frosty is one of these works.

Looking at the lyrics to the classic carol and the plot of the 1969 television special of the same name, we can start to piece together a picture:

Frosty the Snowman, is a fairytale, they say.
He was made of snow, but the children know he came to life one day.

There must have been some magic in that old silk hat they found,
For when they placed it on his head, he began to dance around!

Like every single one of us, Frosty has been forced into the world without his consent by a creator that has abandoned him. As seen in the animated special, his entire existence is a mistake — the product of a careless, disgrace of a magician. He has no purpose, no reason for his construction. This starkly mirrors our own grim condition: we’re globs of strung-together molecules that were given brains by what basically amounts to the roll of a die. We are things that are, but should not be.

Oh, Frosty, the Snowman, was alive as he could be;
and the children say he could laugh and play,
just the same as you and me.

Existence in and of itself would not be so problematic to Frosty if he lacked consciousness. But he is no mere automaton; he is alive and shown to have the capacity for emotion and intelligence as we do. He can laugh and play, surely. But he is burdened with the “gift” of consciousness and all of the suffering that comes with it. Within us, and within Frosty, consciousness constantly comes into conflict with the world around it, allowing us to fully realize the pain, frustration, and meaninglessness of our existence. 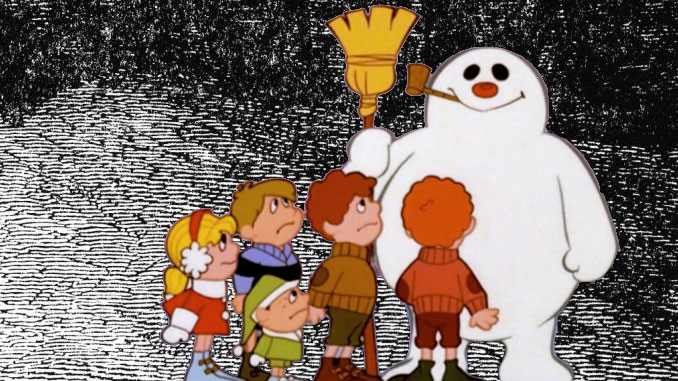 A number of pessimist philosophers from Schopenhauer to Camus have discussed this struggle at length over centuries, but I especially appreciate the way modern-master of literary horror, Thomas Ligotti, so vividly paints it in Conspiracy Against the Human Race: “This is the tragedy: Consciousness has forced us into the paradoxical position of striving to be unself-conscious of what we are—hunks of spoiling flesh on disintegrating bones.”

Furthermore, just like us, Frosty has to suffer with the cruel knowledge that one day his existence will end:

Frosty the Snowman, knew the sun was hot that day,
so he said, “Let’s run, and we’ll have some fun now, before I melt away.”

Soon this jolly snow golem will be collapsed into little more than a few pieces of coal lying in a pool of lukewarm water, and he can do nothing but chase trivial, fleeting happiness to ease his mind until that day comes. Through the consciousness we were never meant to have, we too are ever aware of our approaching doom — a knowledge that causes major strife in our fragile mental framework. We seek out any number of distractions to drown out this dissonance, and keep our minds from examining our own mortality and lack of purpose too closely.

But in the end, there is an even crueler twist to all of this:

Frosty, the Snowman, had to hurry on his way,
But he waved goodbye, sayin’ “Don’t you cry, I’ll be back on Christmas day!”

Here the tale turns into full-blown existential horror. Not only will Frosty meet the end that finds us all, he’s destined to repeat the turbulent cycle of birth, suffering, and death for quite possibly an eternity. And even worse, his powdery mind is cursed with the knowledge of this eternal return. He’ll see Karen and all of the children of the town grow old and frail, and eventually die. The same will happen with countless more generations of children as he can do nothing but watch, each one passing in the blink of an eye. And when all life as we know it ends, Frosty will be there come winter, to greet a silent town. 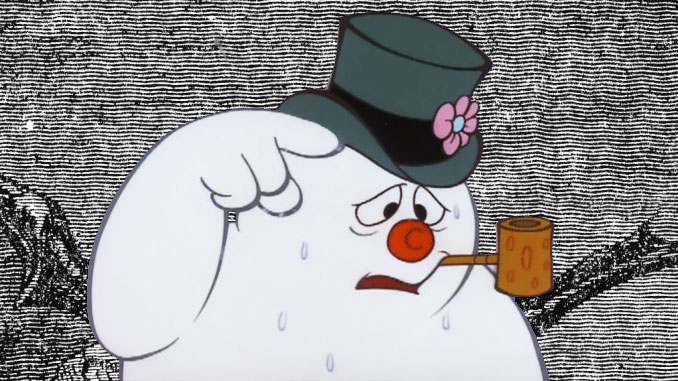 About Sawyer Hildebrandt 3 Articles
A .jpg of a beloved cartoon character with human mouths for eyes, screaming eternally. @hildesaw on twitter

While Christmas may be fast approaching, it’s certainly not the most wonderful time of the year to be a horror fan. As fall fades away, it’s easy to slip into that post-Halloween lull and put horror on the ⤇

Before we start this article I just want to make sure that I say this review will have spoilers. If you haven’t seen this film yet I would HIGHLY recommend that you do so. Now ⤇

We’ve gathered 10 more incredible horror-themed ornaments to make sure that your tree is as disturbing to your loved ones as your taste in movies. Happy holidays! ⤇