Welcome back to our weekly news roundup, where we at Wolfbane Blooms collect some of the most noteworthy horror news from the week to keep on your radar. Let’s get into it!

The Djinn Gets Its First Trailer

Young directors have consistently been putting out some of the best horror of the last few years, so we’ve been particularly excited to see a trailer for The Djinn, which dropped this week. Directed by two relatively unknown people, David Charbonier and Justin Powell, and follows the story of a mute boy who finds himself trapped in an apartment with a monster. The Djinn hits theaters and VOD on May 14—check it out below.

Back in 2020, fans of the bloody, monster-filled, and fabulous horror drag competition The Boulet Brothers’ Dragula were treated to a special two-hour mini competition in which a handful of non-winners from previous seasons were invited back for a special three-tiered competition. The whole production was made by a small team during the pandemic and was released on Shudder to rave review. It’s fantastic, and if you haven’t yet seen it, now would be the perfect time to catch up. The winner of The Boulet Brothers’ Dragula: Resurrection earned a spot onto the upcoming season four of the show, which will also land on Shudder and is now officially casting.

The Power Is Now Available on Shudder

Set at the East London Royal Infirmary in 1974, this spook fest follows a young nurse who shows up at her first day on the job only to find that she’ll be left to work the night shift in this crumbling building—a building holding some spoooooky secrets of its own. Check the trailer below, and head to Shudder to stream it now.

Check Out the Trailer for The Reckoning, Coming to Shudder in May

From Neil Marshall, the director of The Descent, comes a horror film set back in the 1600s when panic about witches was at a high. Our heroine, Grace Haverstock, is unjustly accused after losing her husband during the Great Plague, and must subsequently survive the torturous Judge Moorcroft—England’s most ruthless witch hunter. The film premiered at Fantasia 2020 and is available now on Blu-Ray and VOD, but it becomes a Shudder Exclusive and will be available to stream on May 13. Check out the trailer below.

MST3K Is Coming Back!

First, fans were elated when it was announced that Mystery Science Theater 3000 would return to Netflix to delight and dazzle us hibernating fans. Then, the same fans (and surely countless new ones) were bummed as hell when it was announced that Netflix wouldn’t be ordering more episodes. But wait! There’s more! We all get to be super excited again, as MST3K is making yet another victorious return! Familiar cast, new ideas, new episodes, and even a whole new viewing platform are on the horizon for the show, and we couldn’t be more excited. Check out this exciting Kickstarter to learn more about MST3K’s rebirth and contribute to making #MakeMoreMST3K happen! 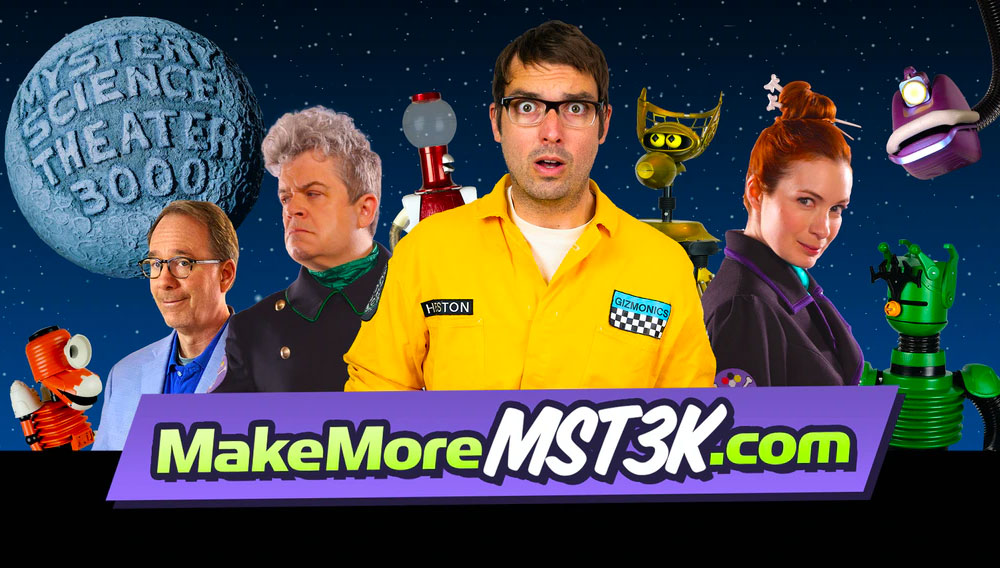 Insidious: The Last Key Gets Its First Official Trailer

We’re headed back to Derry, Maine for what has quickly become the most anticipated horror film of the year. Today, we got our first official look at Pennywise and The Loser’s Club in action after months ⤇

Leatherface Gets Its First Official Trailer

Regarded as one of the most influential horror films of all time, Tobe Hooper’s 1974 The Texas Chainsaw Massacre has spawned a full-blown franchise with comics, video games, and eight films. Today, we got our first ⤇