Hi everyone! It’s me, your pal Carly, and today is Christmas, can you believe it? “Carly,” you’re undoubtedly asking yourself, “How are you celebrating this year? Caroling with your friends and neighbors? Preparing a Christmas ham? Roasting chestnuts by the fire?” No!

I’m watching Christmas movies—Krampus (2015), specifically—and I’ve taken a festive pause here in the evening’s scheduled programming to let you know that if you’re a recluse like me who celebrated Christmas over the weekend because you have a working class family living all over the country with limited traveling capabilities, or even if you are celebrating traditionally with your family and desperately need to remove yourself from the chaos for approximately one hour and 40 minutes so help you God, then you should spend your Christmas watching Krampus, too. If you’ve made it this far, you might as well keep scrolling to feast on the following extremely compelling arguments.

And if you’ve already watched Krampus this season, go ahead and watch it again. And then check out this other list of Christmas horror films worth watching.

We all know that Halloween is horror’s holiday. The pervasive spookiness of the entire season is the perfect breeding ground for scary stories of all stripes. But when you really think about it, what’s more horrifying than forced quality time spent with relative strangers you have nothing more in common with than a shared bloodline?

Max (Emjay Anthony) puts it perfectly in Krampus, after he attacks his aggressively tomboyish cousins for stealing a personal letter he wrote to Santa Claus and reading it aloud at the dinner table, when he says to his father Tom (Adam Scott), “I don’t get it. Every year gets worse. Why do we have to put up with their crap just because we share DNA?” And you know what? He’s right! Why should we? 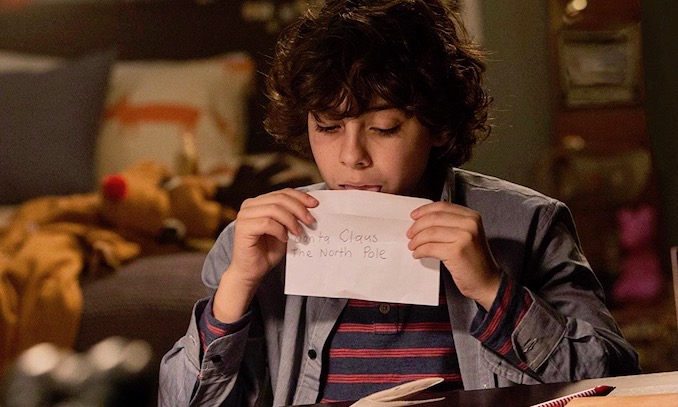 Instead of spending the day speaking to the people you only really see a couple of times a year and would rather not see even once ever again, why not sit quietly in the same room, slide Krampus into your DVD player, and independently enjoy a delightfully festive film about a Christmasy goat demon? Namaste.

Yeah, she might be the mouthy black sheep of the family, the neglected tagalong who invited herself to Christmas, much to the dismay of everyone else involved. But that doesn’t mean she doesn’t shoot straight and tell it like it is, regardless of whether or not anyone wants to hear it. She wasn’t invited anyway, so what’s some additional unwanted commentary? 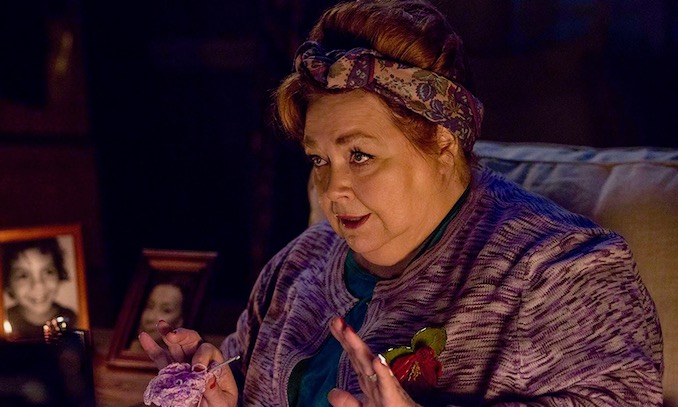 Below, I’ve laid out a few of her signature witticisms, all of which delight me despite every one of them (like most everything Dorothy says) sounding exactly like it was written for comic relief, which it was.

“I never liked kids, even when I was one.”

“I’m old enough to know when life’s coming at me with its pants down.”

“So what kind of godforsaken concoction are you whipping up now? You know how this fancy food clogs my pipes.”

Wow, boy oh boy, do a lot of toys come alive in Krampus! So many toys, so many practical effects, all expertly done by Weta Workshop.

Shit starts to really get fucked at just over an hour into the movie, when the adults go up to the attic after they hear Jordan and Stevie (the aggressively tomboyish cousins who were lured up by a voice purporting to be Beth) screaming. We’re introduced to a whole slew of horrifying little demonic creature toys in the minutes that follow, starting with the nightmarish gaping jack-in-the-box abomination you see above.

We also meet a bloodthirsty teddy bear and some sharp-shooting gingerbread men getting busy with a nail gun in the kitchen. My favorite of the bunch, though, is probably the flying doll creature that looks like a mix of an old marionette, the Annabelle doll, and a live bat. I love it when it falls from the rafters, attacking Sarah and flicking its horrible, serpentine tongue in and around her ear hole. Merry Christmas! 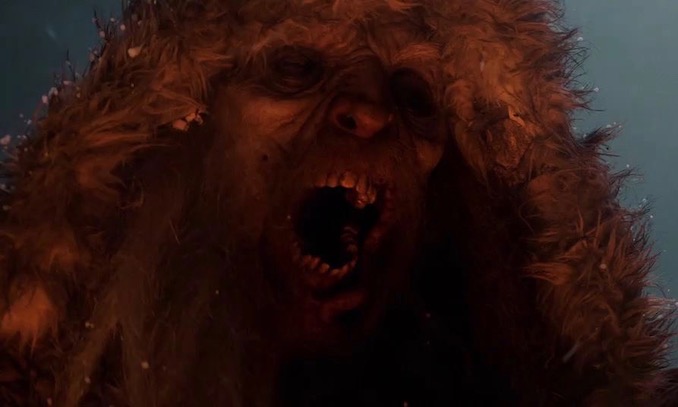 Everyone likes animation—especially the really good kind that calls to mind Laika films like Coraline (2009) and The Boxtrolls (2014)—and by golly, Krampus happens to have it. On paper, it might sound like an odd choice for this kind of film and like it would feel out of place by consequence, but on the contrary, it really works in context.

Director Michael Dougherty called on Weta to craft the “When the Christmas Spirit Dies” animation sequence, which is a story Omi narrates about her interaction with Krampus when she was a child. It’s great—here, watch it:

Plus, everyone knows that animation is for children, which makes this a child-friendly movie, which means that you can quietly slip it into the DVD player this Christmas regardless of how many of your brothers’ and sisters’ children are running rampant around the living room. Cheers and Merry Christmas!

‘Twas the night before Christmas and all through the house, not a creature was stirring….or so you thought. Turns out there might be all sorts of creatures lurking, waiting, and sharpening their blades. So, if ⤇

15 Of The Creepiest Dolls in Horror

The beauty of a good horror story is that anything and everything can be used to bring chills and screams. This is most effective when the object symbolizes a simpler time, like childhood. A doll ⤇

Before we start this article I just want to make sure that I say this review will have spoilers. If you haven’t seen this film yet I would HIGHLY recommend that you do so. Now ⤇