This past Sunday night around 9:30, I settled into my seat in the main theater of the Music Box, awaiting the start of director Chelsea Stardust’s Satanic Panic. It was the fourth day of Cinepocalypse, and honestly, having enjoyed every single movie I had seen thus far, I couldn’t help but wonder if this is where my luck would finally run out. Spoiler alert! Nope! It didn’t. My luck didn’t run out, and I loved Satanic Panic from toe to tip.

Mere moments after sleepily considering my luck’s lifespan, director Chelsea Stardust took the stage to introduce the movie and thank us for showing up. No, thank you, actually. We politely clapped for her, and she quickly launched into a tight intro:

“This movie is my love letter to The Evil Dead,…” My ears perked up. “…Shaun of the Dead,…” I sat up in my chair. “…Jennifer’s Body,…” A person behind me screamed “HELL YEAH!” and I nodded enthusiastically, now fully awake, as if we were a coordinated duo. Stardust fired off a few more classic titles in rapid succession, and if the list hadn’t already been enough to win over my heart (it was), she then made one final request of us audience members that pushed me right over the edge.

“On the count of three,” she asked us, “Can you guys throw up the horns and gimme a ‘HAIL SATAN’?”

Why, yes! Yes, Chelsea, I can, and—in fact—I’ve been waiting for you to ask me to my whole entire life.

“HAAAAAAAAAAAAAIIIIIIIIIIIILLLLLL SAAAAAATTTTTTAAAAAAAAAAAAAAAAN!!!” we all screamed, horns thrown, in what would end up being one of my favorite moments of the festival. Because hell yeah, though. Hail satan. Isn’t this what we’re here for? 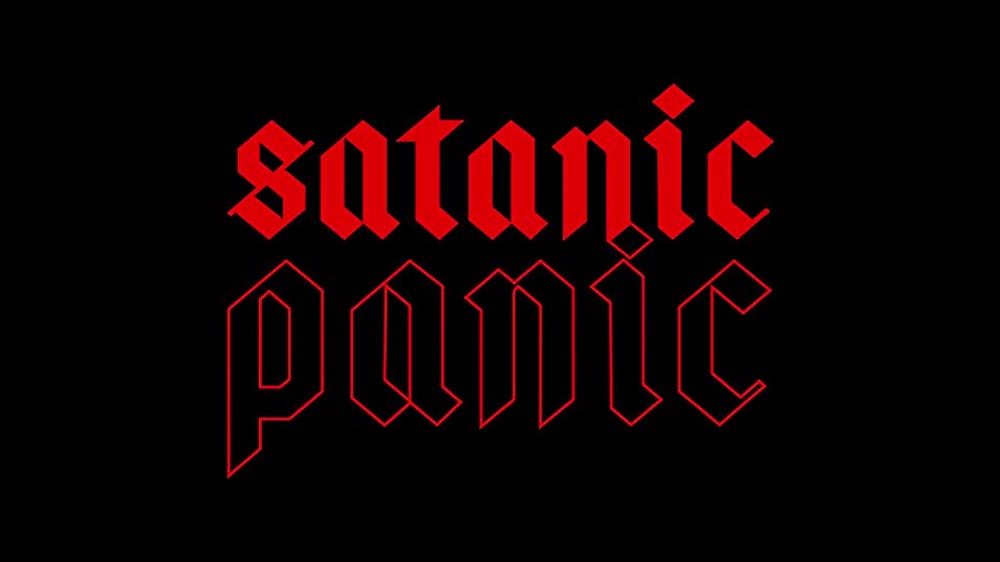 Anyway, Satanic Panic itself ended up being just as much fun as its delightful director promised. It’s the story of a super naive, early-20-something girl named Sam (Hayley Griffith) who likes to sing cutesy acoustic folk songs about furry animals and visiting Australia. It’s not a very lucrative pursuit, singing on camera from her childhood bedroom and busking on the street, so our good pal AJ Bowen (who is truly in everything these days, right?) gets Sam a shitty job delivering pizzas.

After a full night of tip-shafting from most every customer, a penniless Sam takes another delivery—this time, to a rich person neighborhood—hoping to score enough scratch to fill the measly tank of her moped. Yes, of course she drives a moped. Please. It’s blue.

As you might imagine, she doesn’t quite get what she’s hoping for, and actually, the results end up being way more damaging than the initial zero on the tip line. You see, after the heavy, wealthy, rich person door is slammed in her tipless face, Sam tries to start her moped which, of course, doesn’t start. Instead of using her cell phone, she stubbornly breaks into the rich person household, hoping to find a rich person she can fleece for gas money. But instead of your average rich persons, Sam runs into a cultish collection of Baphomet-worshipping rich people who, of course, are on the hunt for a virgin. And remember those furry-animal-themed acoustic songs Sam likes to sing so much? Yeahhh…so, it’s perfect! Serendipitous, even. For the cult, of course, not for sweet, virginal Sam. I would say “she’s proper fucked,” but the fact that she actually hasn’t been is why we’re here in the first place.

But speaking of fucking, this is the point in Satanic Panic where things start to get really fucking fun. Our cast of characters is widened to include some of the standouts of the film. Rebecca Romijn makes an excellently high-brow cult-leading lady named Danica, but my favorite cult member was her sorta kinda right-hand woman, Gypsy Neumieir, who (as sidekicks are wont to do) spends the whole movie vying for control of the cult. She’s played by Arden Myrin, who brings the perfect level of chaotically overzealous and relentlessly high-strung energy to the neglected Number Two character, and hers is one of the most committed and excellent performances of the film.

When we’re introduced to Judi—Danica’s rebellious daughter, played by Ruby Modine (who you’d remember from Happy Death Day)—Sam finally gets both an ally and a sympathetic scene partner. Satanic Panic has been described by others, tonally, as a genre blend of horror mixed with elements of a young adult/coming-of-age kind of film, and this definitely feels most accurate when Sam and Judi are on screen together.

This is also primarily where I got most of my Jennifer’s Body vibes—and not just because Stardust prepared me for that at the top. There’s a similar kind of character dynamic between Sam/Judi and Needy/Jennifer—the former being more sheltered, naive, and trusting while the latter is confident, sure-footed, and action-oriented—and this manifests in a lot of tonal similarities, especially comedically, that JB fans are going to appreciate.

Satanic Panic had some more specific and direct homages layered in as well, my favorites of which nodded to The Evil Dead. I don’t want to spoil too much, but I will say that there’s a great scene involving Sam’s body and a seemingly possessed bed sheet that looks a whole helluva lot like a mangled tree root, if you know what I’m getting at (and I think you do).

But a possessed bed sheet that looks (and acts…) like certain mangled tree root is only scratching the surface when it comes to both the quantity and quality of effects packed into Panic’s almost exactly hour-and-a-half runtime. Bursting from that effects bag, you can find, for example, both a giant mechanized driller dildo and a goopy creature pulled from the chest of a human person (by way of the neck) that was then baked in the oven like a turkey in a casserole dish before being given a bit of Sam’s t-shirt and sent flying—literally, because this insane little monster can inexplicably do that—into the night to track her down like some sort of scent hound.

If you’re having trouble making sense of that visual, you probably haven’t seen Satanic Panic yet, which is something that I highly suggest you reconcile at your earliest opportunity. And, with its recent acquisition by RJLE Films, you should be able to do that in theaters and digitally on September 6.

All in all, it was a really fun horror bop with well-executed effects and committed performances throughout. Fangoria really knocked it out of the park with this one, so we’re definitely stoked to see more from them (and Chelsea Stardust) in the future.

It’s not an exaggeration to say that everything about Why Don’t You Just Die! was well-imagined with even better execution and follow-through, from its darkly comedic script to its expertly choreographed action and blood-soaked effects. ⤇

Chicago has been abustle with delightfully horror-themed activity since Cinepocalypse 2018 kicked off at the Music Box Theatre on Thursday evening with a screening of The Domestics. But I didn’t see that movie, and I’m ⤇

This Week in Horror: The Last Drive-In Is Back! (And More)

Welcome back to our weekly news roundup, where we at Wolfbane Blooms collect some of the most noteworthy horror news from the week to keep on your radar. Let’s get into it!
⤇