Annabelle: Creation is a very good movie. And I’m not just saying that because—hot take alert—I’m part of the small group of enlightened, transcendent folk who thought Annabelle was also a fine movie. In fact, Annabelle and Creation are very different films, with very different directors whose respective tones are…well, very different.

I could truly go on for days about how the shade John R. Leonetti’s Annabelle received was entirely misplaced, thrown largely by people with expectations that this film was something—like a prequel to The Conjuring, for instance—that it was not and, more importantly, not trying to be. But being that we’re here for Creation, let’s stick to the script.

Lights Out director David F. Sandberg directed Creation in an effective and almost surprisingly bold style. The film was filled to the brim with horror sequences—after a well-executed period of opening exposition—and each sequence somehow felt more effective than the last. How about those fingers around that crucifix, am I right?

I say “surprising” because Creation took the hardline stance that it would be a film that showcases the monster in all of its forms, allowing audiences to look directly at it in a variety of tense and dynamic circumstances—and the film owned that decision.

The way the demon is treated in demonic possession films tends to vary pretty wildly depending on the film. But I was definitely expecting a more indirect or perhaps lighter and less frequent approach with this film, based on its older sibling Annabelle and cousin, The Conjuring. Instead, I was blown away.

We got to see the monster a lot, and we got to see it taking a variety of forms. The acting all-around in this largely female cast (aside from Anthony LaPaglia, who was a perfect Mr. Mullins) was really on-point, with a lot of young talent showing impressively maturing skill. 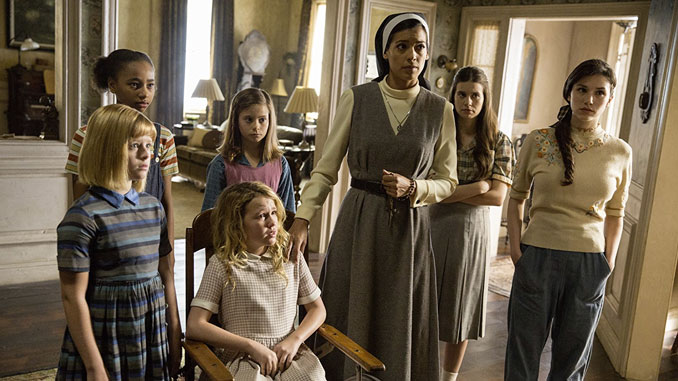 But a wholehearted commitment to boldly showing the monster wasn’t the only thing Creation did well. In fact, most everything it attempted was executed well. It built suspense very well, it showcased the demon in both human and monster form well, it shot scare sequences well.

Another few standouts aside from the aforementioned fingers are the Mrs. Mullins montage while the older orphans hide under their sheet, the dollhouse and other assorted wooden items smashing against the wall in Annabelle’s room, and the barn body-takeover sequence in the third act.

Overall, Creation was a very well-executed film. It was scary at the right times in all of the right ways, and it left me hoping to see more from David F. Sandberg soon.

17 in ’17: Exciting Horror Movies to Look Forward to in the New Year

I think we can all agree that 2016 was not a great year all around, especially for the movies (unless you were an animated movie or just Disney in general). We saw some awful horror ⤇

Take a look back on Week 1 and Week 2 of our 31 Days of Horror. For many, during the month of October, it has become tradition to celebrate the season by watching a horror movie ⤇