Monsters come in many shapes and sizes. Sometimes they are a short, green, eyeball monster with incredible comedic timing, or a monster with the head of a flower made of teeth from an upside down world. Sometimes the scariest of monsters come in the form of an abusive parent or the feeling that you are not good enough. Director/writer/producer Bryan Bertino has had success with creating his share of monsters. In 2008’s The Strangers and 2014’s Mockingbird he showed us that the scariest of all monsters is Man. Then in 2016’s The Monster Bertino took a step in a different direction by attempting to create a more traditional monster. Except, is there more going on underneath the surface of this film?

The premise is about as simple as they come. A mother and daughter are stuck in their car in the rain while being terrorized by a mysterious monster. This premise alone got me excited about the possibilities. It’s not often a small film like this delivers. Usually the simple premise is all but abandoned fairly quickly, or the filmmaker tries to reach for something grander than their grasp will allow. The focus is lost and the movie becomes something it never should have been. Unfortunately, The Monster falls to the latter. The film never wavers from the premise of the mother and daughter stuck in the car, but Bertino tries to make the story about their relationship while also trying to keep the traditional monster movie intact. The result is a mess.

There are scenes where a tow truck driver is brutally attacked by the monster, but then we are shown flashbacks of the mother and daughter having a fight. Any terror or sense of dread that we can get from the danger of this monster is put to rest by the complete lack of suspense that these flashbacks bring. On the other side of the coin, the flashback scenes are not allowed to be given the full effect that they should have in order for the audience to connect with these characters. And Bertino really wants us to connect with these characters. 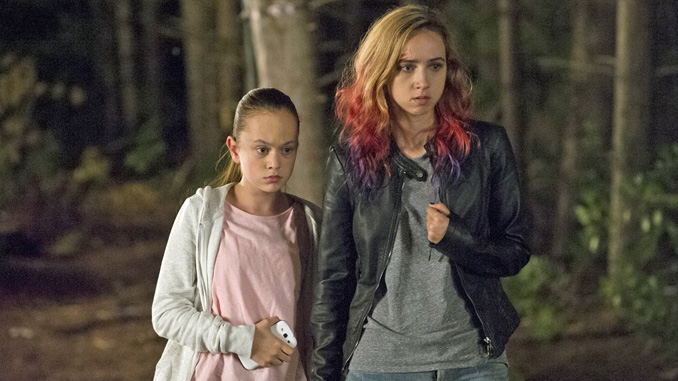 This connection is so crucial that the entire movie depends on it. If at any point you do not care about these characters, you are quickly taken out of the movie. This is a dangerous game to play and unfortunately it did not land with me. While the acting of the two leads, Zoe Kazan and Ella Ballentine, was very good and deserves recognition, it is the fact that these two do not have enough and at the same time too much to work with. I understand that the mother and daughter have a terrible relationship, after all they are on their way to drop off little Lizzie, with her dad so the alcoholic mother Kathy, can get on with her life. The movie spends so much time in flashbacks showing us that these two hate each other (Lizzie holds a knife to her sleeping mother’s neck) that the audience accepts this dynamic a little too much. I don’t want them to be near each other. They probably shouldn’t be around other people. Let the monster have them both.

This terrible relationship Lizzie and Kathy have with each other is the underlying “monster” that they have to fight in order to redeem each other. The monster represents so much more than just a black creature made of teeth and nightmares. This is where things get muddled. The balance is off between the physical monster and all the underlying subjects that the monster is meant to represent. The mother’s alcoholism, the daughter’s yearning to be cocooned in childhood, the hardships of being a young single parent, resentment towards a parent, the aforementioned fractured relationship that the two share; this is all too much for one monster to handle. The audience does not need to be hit over the head with the symbolism. There is a shot at redemption on the mother’s part, but her actions are so unwise it is baffling. In that moment, I ended up caring more about the monster than the mother, but that might be because the monster is actually interesting.

When the physical monster is the focus, it shines. The bird-like, tar-black appearance of the monster is unsettling at times. The terror is real; this monster does some horrible things. Bertino does a respectable job at not showing the monster too much. He is kept in the shadows for most of the film, of course it helps that the monster does not do well with light (yet another metaphor about bringing your personal demons to the light, we get it). We never get a good look at the monster until the climactic battle. By the time the monster is defeated, strangely, nothing feels resolved. It was just an end. This is in large part due to the fact that there was too much weight placed on the shoulders of the monster. If the movie had been a simple monster attacking these two in their car, it would have been much more effective.

A movie does not have to always need to have a deeper meaning, but If you want it to, don’t try so much. The premise is simple, keep everything else simple too. It is much more effective. The movie would have done better by having the mother/daughter relationship focused in the moment with the monster, and not so much with their past. Less is more. This is how the masters have done it, from Hitchcock to Spielberg. Keep the movie simple. Streamline the relationship woes. Focus on one or two particular aspects and really drive it home. The Monster thinks it knows where it is going but runs down the audience in the process. Leaving us like the wolf in the middle of the road, but we are not lucky enough to have a monster come take us away from our suffering. 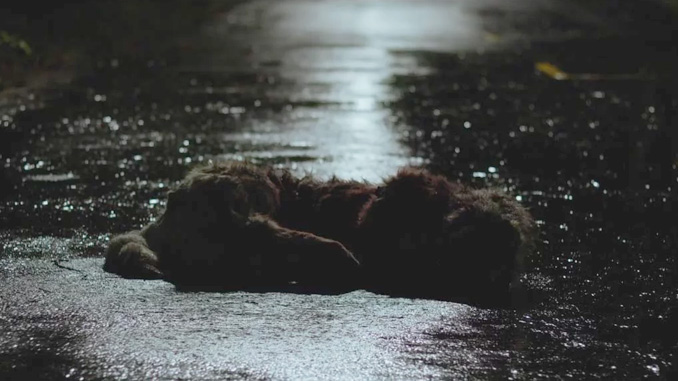 A24, the production company behind Ex Machina, The Witch, Green Room, and The Monster, has given us our first look at It Comes At Night. Scheduled for release on August 25th, the film stars Joel Edgerton who recently ⤇

It Comes At Night Gets Its First Official Trailer

It’s been almost three months since we got our first look at Trey Edward Shults’ upcoming horror/thriller It Comes At Night. The film’s teaser trailer did a wonderful job piquing our interest while keeping us ⤇

If your internet tendencies at all reflect my own, you’ve probably noticed that Google has been serving ads for The Strangers: Prey At Night almost nonstop in anticipation of its quickly approaching March 9 release. ⤇