The power of film is interesting. Certain stories can strike the right chord within someone and will stay with that person to the point where they regularly revisit the film. It becomes a favorite, and of course a person’s favorite movie does not depend on how good a movie is. It is all subjective; one man’s trash is another’s treasure. For instance, my wife loves Michael Bay’s Pearl Harbor, despite it being widely panned as trash. It doesn’t matter to her, she loves the film (I’m with you, I don’t get it). However, what is fantastic is that when a movie is great, it can shape a person’s life. It can inspire, and forge bonds between those who share the love and appreciation. Steven Spielberg has created some of the most widely loved movies in the business. Although he has brought to life some of cinema’s most famous characters, the movie that threw him into stardom has become a favorite for many, including myself. Of course, I am speaking of Jaws.

Like most people, I can remember the first time I saw my favorite movie. I was eleven years old and it was the night before we took a family vacation to Orlando. Everyone had gone to bed early in order to get some rest before the early flight. I wasn’t tired, so I decided to stay up a little while. I was sitting in the living room and decided to see what was on TV. Finding nothing, I landed on Turner Classic Movies, and some movie was just ending and then on came host Robert Osbourne to introduce the next movie, Jaws. He revealed some interesting facts about the film, at least I assume he did because I was busy thinking if I was ready to watch this movie.

You see, as a child I was easily scared not only by horror movies, but movies with a “scary” scene. It was so bad that if I saw a commercial for one of the Child’s Play movies I would run from the room, or even worse, I once claimed I had to use the bathroom because I knew the Bigfoot scene was coming up in A Goofy Movie (my mom did not buy my excuse, thankfully). Looking back, it was not only embarrassing, but a hinderance. Back on the couch, I knew that I was too old for all this childishness. It was time to watch the movie that I became aware of and frightened of, when I saw that iconic poster hanging in a hotdog stand when I was probably around the age of 5 or 6.

As the movie started I was very nervous, but by the time Chrissie was thrashed about and finally disappeared into the ocean, I was tense and on the edge of my seat. That tense feeling morphed from childhood trepidation into apprehensive exhilaration that accompanies me with every well made horror movie to this day. Not until writing this did I realize that the moment on the couch was when I became a fan of horror movies, or at least that feeling. At the time, all I knew was that I was watching a movie unlike any I had ever experienced before. I was actually proud of myself that I finally overcame that silly fear. A few days later I was able to fully enjoy the Jaws ride at Universal Studios; a ride I never would have dreamed of being able to enjoy. In fact, I was a little surprised by how unafraid I was. Now, I know that this isn’t true for everyone. 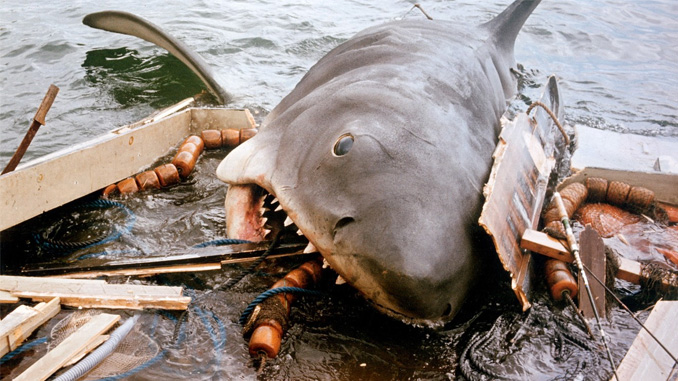 There are countless stories of people who swear they will never go into the water after Jaws, including Spielberg himself. I can understand the fear, but it’s beyond me. I guess I was one of the lucky ones. My brother, on the other hand, was not so lucky. When he first saw Jaws when he was a young boy, our older brother and his friends decided to throw him into the dark pool outside. It scared the hell out of him, but it wasn’t enough to damage his love of the movie. While I was watching the movie that night, right at the end of the Quint’s captivating monologue, I heard a banging coming from the other room. I went to see if I was needed. It was my brother; he didn’t need me at all. He was banging on the door because of what was happening in the scene. Quint, Hooper, and Brody were singing and banging on the table causing them not to hear the shark. Even though the movie scared the hell out of him, my brother knows that movie inside and out.

That’s the power of Jaws; It is so effective that, despite the fear it can bring, people still willing revisit the characters. Spielberg and the screenwriters improved what was already in Peter Benchley’s best selling novel. A lot of that goes to the credit of the animatronic sharks. It has been well documented that the production of the film was a nightmare for everyone involved, especially Spielberg. Besides the shark hardly working, the conditions on the ocean caused a lot of trouble from the entire cast and crew getting sea sick, to the boat actually sinking, to something as simple as waiting for other boats that appeared on the horizon to disappear from the shot all added to the frustration. The movie became way over budget and even more so over schedule. A simple 3.5 million dollar budgeted film that should have taken approximately 55 days went on to cost about 9 million that took 159 days. We are lucky that Steven Spielberg is still making films, because this would have been enough to scare off anyone from the business. I’m sure that the fact that this Jaws went on to become a juggernaut, breaking records was enough to squelch any doubts of filmmaking that could possibly have come up.

The movie became so big that Jaws merchandise was popping up everywhere. T-shirts, toys, mugs, even toilet seats all bared that image of the shark. It is not a surprise that the film spawned three sequels of varying quality. It’s hard to watch these later sequels and understand that there is any connection to the 1975 original. The only one that can come close is Jaws 2. It returned much of the main cast, with Roy Scheider, Murray Hamilton, and Lorraine Grey reviving their roles. Notably missing are Richard Dreyfuss and director Steven Spielberg. Perhaps they were wise enough to see there was no need to take the story any further, or maybe they didn’t want to relive the hellish experience all over again. I like to assume the former. Roy Scheider agreed to appear in the film to get out of a contract with Universal. The magic just wasn’t there any more going into it. 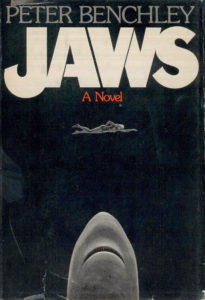 I should confess that I have not seen Jaws 2 so I can not speak to the quality of the movie itself, but I have seen the other two sequels, Jaws 3D and Jaws the Revenge and *oof*. Maybe at some point I will watch the second film, but right now there is enough of a distance between the original masterpiece and the laughable sequels that I do not want that second film to bridge the gap. I am perfectly happy with having the story end as Brody and Hooper wade into shore and walk off the beach. It is a perfect ending, one that is much different than the book itself.

Where the movie brings to life charismatic, human characters that you root for throughout the entire movie, the book paints a much bleaker outlook on everyone. Chief Brody is an unhappily married jerk who deals with his wife cheating on him with Hooper, while fighting the mayor who needs the beaches open because he owes money to the Mob. Not a single character cares about another one and in turn, neither does the reader. It’s as if the shark is doing these people a favor by dragging them to the bottom of the sea, which is the ultimate fate of the beast. This leviathan doesn’t have a big explosive end, instead it sinks to the bottom of the ocean after succumbing to it’s many wounds. Very different than Spielberg’s vision, which gets the audience on their feet by the end of the film as the shark blows up.

It’s an excitement that you can’t contain; you want to share that feeling with someone. One of my favorite ways to watch Jaws is with someone who has never seen the film. This is something that is true for everyone who gets to share their favorite film. Getting to see the film through new eyes and watch someone react to moments that you know by heart causes your appreciation to grow. The only downside is that no matter what, at that moment, they can not enjoy the movie as much as you do. I was able to show Jaws to my wife for her first time and although she truly liked the movie, she is not willing to watch it as often as I do (which probably averages once a month). At times like that, it’s good to have someone who shares your depth of love of the movie. Thankfully I have that. One of my oldest friends shares a similar love of Jaws. He was introduced to it by his father who fell in love with the movie when he first saw it in theaters during its initial release.

Andrew and I got to finally experience the movie together in theaters when it was re-released for a limited time in theaters by Turner Classic Movies for the movie’s 40th anniversary. Sitting in that theater with people of all ages, some seeing the movie for the 20th time sharing the experience with those seeing it for the first time, was one of the best experiences I’ve had seeing a movie. It is the way Jaws was intended to be seen, but if you can’t see it in a packed theater, then sitting on the couch late at night in your living room will do just fine. Jaws doesn’t need much to sink it’s teeth into you and never let go. 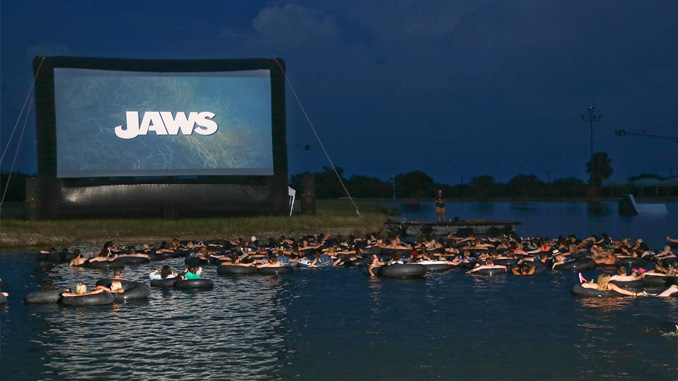 1982 was a huge year for movies. A lot of classics came out that year, including one of the best horror movies of all time, Poltergeist. Helmed by one of the greatest forces in Hollywood, ⤇

Quiz: Can You Tell If These Famous Horror Movie Quotes Are Correct?

There are some movies that explode into pop culture. Everything about the movie seems to be everywhere; from merchandising to references ad nauseam. One true sign that a film has crossed from phenomena to iconic status ⤇