After swearing for months that I would never be swindled into giving my money to another streaming service, I signed up for Shudder. After mindlessly scrolling through the catalog for two days, I decided to break in my shiny new monthly payment with Demons (1985)—a movie that I knew existed but had never seen. At the very least, I knew it was an ‘80s movie about demons and even then, it turns out that I was only half right.

Almost immediately after it started, my mind was destroyed upon seeing Dario Argento’s name flash across the screen. Some light Googling informed me that while Argento wrote the film, it was directed by Lamberto Bava, who is a person that I have never heard of before. Within moments of seeing Dario’s name and learning this information, it became clear that my newly heightened expectations were now way too high. 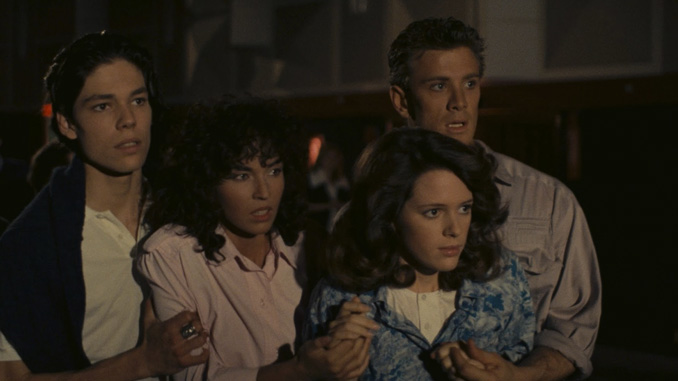 I think it should probably be said up front that Demons is not a very good film. There are definitely things to enjoy about it, but it lacks basically everything that society has decided makes a film good. Still, by some miracle, it has managed to transcend the wandering plot, forgettable characters, terrible dialogue, and maddeningly bad dubbing to become something of a genre staple, and I can respect that.

Criminally long sequences of classic ‘80s punks driving around and listening to hair metal while they snort cocaine notwithstanding, the film mostly focuses on a movie theater full of strangers being turned into “demons.” I put “demons” in quotes there because are they? They sure do seem an awful lot like your standard, everyday zombie. As far as I can tell, the only difference is that they grow claws, and sometimes, if the light hits them just right, their eyes might glow. Toward the end of the film, as a creature is bursting from someone’s back, I remember saying, “Hey, yep. That’s a demon.” So I guess the title isn’t a total betrayal.

Every character we meet in the theater seems to be an amalgamation of off-putting stereotypes and the undesirable traits that make a person the most unlikeable. After realizing what’s happening around them, the ill-fated cast spends the remainder of the film sweating profusely while doing things like screaming, yelling, shouting, and lightly pounding on walls. Somewhere between the buckets of sweat and genuinely pained expressions, I started to get the vibe that this is definitely the type of low-budget production where people get hurt. And it turns out that I can really get on board with that.

I think what saves Demons from obscurity are the boil-popping, scalp-ripping, eye-gouging, practical effects mercifully crammed into every moment that we’re not forced to watch a teenager scrape cocaine off of his girlfriend’s boob with a razor blade. The practical effects are campy, gross, and so delightfully over the top that they immediately bring to mind films like The Evil Dead and Dead Alive.

Once you let those sweet sweet gory effects lull you into a sense of acceptance, it’s not hard to see why this movie is well-liked. I mean, the climax involves our main beefcake riding a dirt bike around the theater chopping up zombie demons with a samurai sword before using a grappling gun to basically just shoot himself right out of the hole in the ceiling. What’s not to like?

After a laughable rooftop battle with an unexplained antagonist, the film ends like every single zombie movie before or after it. As the credits start to roll, our sweaty, beefy hero hitches a ride with gun-toting strangers and they head toward the prospect of a new, zombie-less existence just over the horizon. Considering that they made seven Demons sequels, I think it’s safe to assume they don’t make it. Spoiler alert!

Dario Argento: A Primer in 9 Films

We’ve laid out a primer that recognizes Dario Argento’s “must-watch” films and the best entry points for those looking to dig into his filmography. ⤇

Remakes are tricky beasts. It’s a line I’ve been muttering over and over to myself every time I’ve sat down to review Luca Guadagnino’s Suspiria since seeing it opening weekend. ⤇