Here in 2018, we’re all inextricably linked to the Internet. We carry computers around in our pockets, many of us spend our days toiling away in front of one for both business and pleasure, and if you didn’t have one yourself, you wouldn’t be reading this in the first place. It’s exactly this deeply ingrained familiarity, this automatic reliance—whatever you want to call it—that we all have with and on technology that precludes me from buying into a story in which it plays the antagonist, the centerpiece of the mystery. We know better than that. The Internet is not the enemy today and more often than not, it’s not much of a mystery either.

Feeling the way I do, I was nervous going into director Daniel Goldhaber’s Cam (2018)—a film that promises to concern itself almost exclusively with the Internet. And yet, it really managed to surprise me. 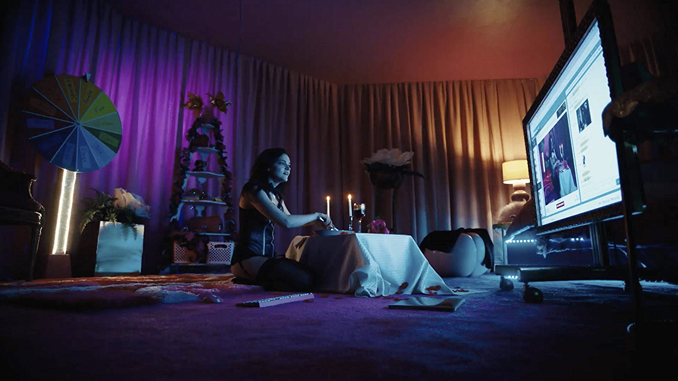 The story unfolds when Alice opens the website one morning to find that her channel seems to be live, despite the fact that she’s not even logged into her account. When she clicks in to see what’s going on, she’s met with a live video of her doppelgänger on screen—an exact replica of Lola the camgirl—conducting her own all-original show. It’s not a replay, this specter is doing things the real “Lola” has never done.

And here, the relatively standard concept of identity theft becomes that much more complicated and that much more interesting. How do you go about combating a mysterious cyber villain you can’t touch and can’t understand, who has stolen the part of your identity that only exists on the Internet and presents exactly like you to everyone watching?

With a cam audience that doesn’t recognize the change, a hands-off website support staff, and indifferent police officers, Alice is left to her own devices to figure out who—or what—is behind this hostile takeover and how to regain control of her account and her life. 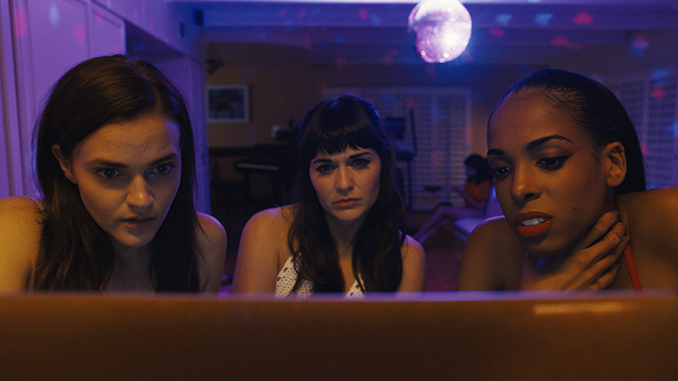 Screenwriter Isa Mazzei’s script feels like a mix of Black Mirror and Hot Girls Wanted. We’re getting the psychologically thrilling, too-realistic-for-comfort technological mystery of the former, set against the latter’s rather unglamorous behind-the-scenes backdrop of the mid-tier, amateur sex work industry. And in the latter regard specifically is where the film succeeds with flying colors.

What this film seems to question is to what end that intimacy really extends, how real it is, so long as it’s bred on the Internet between parties shrouded in performative disguise. It’s these disguises that allow the relationship to exist in the first place—Alice, for example, is an unwatchable, disheveled nail-biter in real life, while Lola is a sexy, confident, and very watchable vixen on-screen. But these disguises can be sinister, too, being not only what supports the fraudulent Lola but also what protects her. In these reward-based relationships, it’s all about who wears the mask better. The best performer wins the tokens, the top 50, the intimacy. 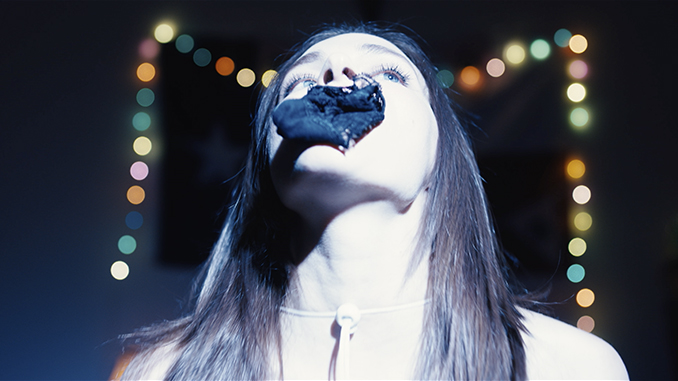 Perhaps because of Mazzei’s past as a camgirl in the industry herself, Alice’s world feels very authentic. She’s young, still living in her own small hometown and taking pains to keep her taboo career choices a secret from her mother until she feels she’s “good enough” to tell her. She’s navigating a relationship with her 17-year-old brother, who is not only himself aware of what she does but is surrounded by friends who are also very aware of it—something that becomes increasingly more complicated when sinister doppelgänger Lola begins to share personal details on her show that Alice never would have.

This world-building is heavily supported by Madeline Brewer’s standout performance. I would say that you might recognize her from her role of Janine on The Handmaid’s Tale, but without knowing that information going into the film, you probably wouldn’t. Brewer completely disappears into this role, which just reinforced to me how deeply she disappeared into the understandably unhinged Janine.

Another of Cam’s rather unexpected triumphs is its spectacular cinematography by Kateline Arizmendi. Based on the subject matter and with so much of the film taking place in Alice’s cam room, I wasn’t exactly expecting a runway for brilliant shot composition, though much to my delight, that’s largely what I got. 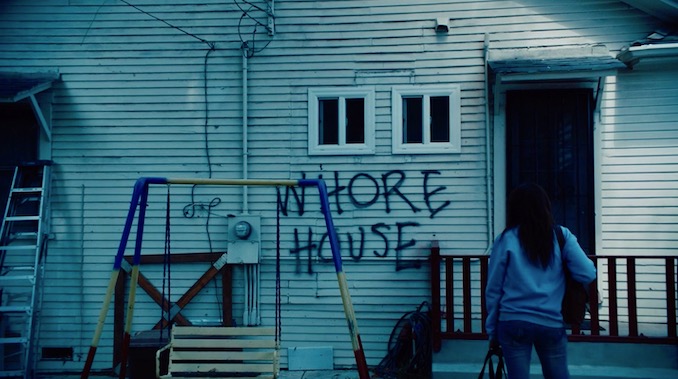 While the shots within the cam room are composed well, Arizmendi was really able to shine every time she was unleashed into Alice’s real world. There were multiple slow tracking shots that played as conscientiously crafted stills, with just the faintest chess piece moving around the canvas, like paintings partially come to life.

Sometimes it’s easy for films concerned with the Internet to lean heavily into an aesthetic that can feel plasticky and unrealistically elevated. But Goldhaber and Arizmendi worked to keep the film grounded in its reality, which in turn made the technology feel more realistic than it usually does.

Unfortunately, there is a place where Cam didn’t quite do enough, and even more unfortunately, it’s rather detrimental. For as well as the filmmaking supports the building of this very engaging world, the mystery—the Black Mirror side—is where everything falls short. 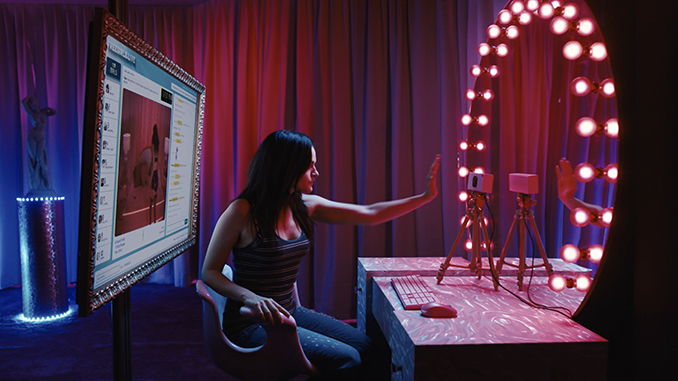 While the mystery itself is engaging, upsettingly realistic, and full of potential, Cam definitely doesn’t explore it thoroughly enough for the audience and never really answers any of the pertinent questions that its mere existence raises. And perhaps worse, it treats those questions, at the end, as if they didn’t much matter to begin with.

While the “but it never mattered anyway” trope can be really effective when it’s done well—take Saw (2004), for instance—it feels lazy here, like an ending purposely rushed because too much time had already been spent elsewhere.

But for as big of a deal as you’d imagine that mistreatment of the actual mystery to be, it wasn’t particularly distracting in the moment, and I still walked away from this movie having really liked it. Seeing the ways in which it could’ve been better have easily come with time and concentrated consideration, but the tight hour-and-a-half experience was surprisingly gratifying. Available now on Netflix, I’d suggest giving it a watch.

There were a lot of things to like about Netflix’s most recent horror release, The Ritual. What could have easily played out as it has in previous lost-hiker-voodoo-forest-horror films (read: The Blair Witch Project), David ⤇

This review contains spoilers.  I just finished watching The Cloverfield Paradox, and here’s the thing: it’s not great. We all know the story of the film’s dramatic release, we were all surprised, etc.—let’s skip that ⤇