When it was announced, what seems like an eternity ago, that the streaming giant Netflix would be more focused on producing original content, I was skeptical and a bit disappointed that the great content I was familiar with would be taken away and replaced with unfamiliar trash. Needless to say, that was far from the case. Netflix has time and time again proven that it can provide original content that can run neck and neck with the biggest studio. Unfortunately, Netflix has a horror problem. The current track record is miserable to say the least. Original horror content is sparse and what there is, is dismal.

This isn’t to say that Netflix hasn’t had any success when it comes to horror. There have been a couple great releases with the adaptation of Stephen King’s Gerald’s Game and the horror comedy Little Evil, but those are few and far between. What’s taking up the majority of the room are clunkers. We need look no further than I Am the Pretty Thing That Lives in the House. It is the epitome of a movie that wants its audience to think it’s a smart work of art, and if you don’t get it, then you missed the movie’s point. I guess I come from an old school way of thinking where a movie needs to have a plot, compelling characters, or at least a moment where something relevant happens in order for it to be enjoyable.

One of Netflix’s newest forays into the horror genre is The Open House. While it’s drastically different from I Am the Pretty Thing, it certainly accomplishes the same outcome; a different means to the same end. Directed and written by Matt Angel and Suzanne Coote, The Open House stars Piercy Dalton and Dylan Minnette as mother and son who stay in a house that’s on the market. During the day, the house is open for potential buyers, but at night Dalton and Minnette experience… mild annoyances like the hot water getting turned off while Naomi (Dalton) is in the shower, and Logan’s (Minnette) phone going missing before turning up again.

Some of these instances do lead to creepy moments. At one point, the missing phone rings and no one answers on the other end. We know something is up and they give us just enough to recognize sounds inside the house. These tense little moments try to drive the film and they do help it avoid becoming a total disaster. However, there never feels like there is any real danger, at least not the danger that the movie wants us to feel. This makes the end come as something as a surprise. 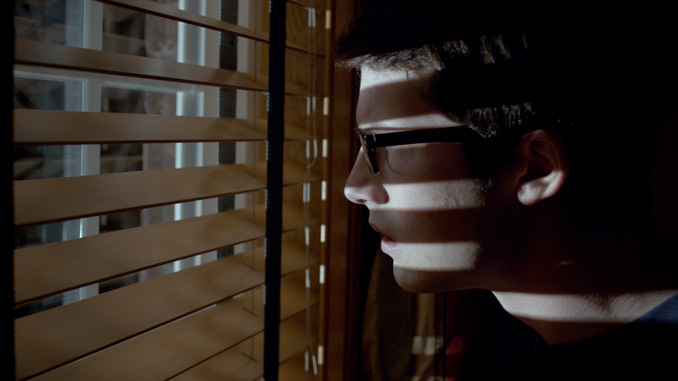 After being led down several rabbit holes, the neighbor, plumber, realtors, store clerk, we find out that in fact it was no one we knew causing the problems. If The Open House wanted to be successful, then some of these clues should have played out or at least have had a meaning. Throughout the film we are reminded of Logan’s contacts, his father’s death, and how much he loves to run. When the climax comes and Naomi is tied up and tortured, Logan is stripped of his contacts and sent off running blind into the cold. Nothing that’s come before has any bearings on the end results.

The Open House is either not daring enough or not smart enough to give a gut punch like better movies have. In The Strangers, we’re left with despair after being put through the wringer and our only hope at the end is violently pulled away. All loose ends are tied up and there are no other options. The plot holes in The Open House could have been forgiven if the characters were strong, but the relationship between mother and son is never believable. After a few days, they begin to hate each other and unfortunately they weren’t written well enough to care. The actors are not to blame here, the responsibility rests on the screen writers lazy and cliched script.

That’s the problem with Netflix taking scripts that have been turned down by other studios. While other big studios have given us trash like The Bye Bye Man, Rings and Wish Upon (that’s just in 2017), Netflix is trying to follow the interesting idea. Unfortunately, sometimes interesting just isn’t enough.

The Open House was charming and mysterious, but unfortunately when we gave into the lure, it didn’t seem to know what to do with us; it was shocked it go this far. So, instead of being able to deliver a satisfying ending for both the movie and the audience, it got too excited with itself and, well, left a mess. So, if The Open House is Netflix trying things out, then I think we can at least bear with them as they try to find their footing within the horror genre.

In October, the original content machine known as Netflix released it’s first original horror film, I Am the Pretty Thing That Lives in the House. While I Am The Pretty Thing was a substantial disappoint to ⤇

Netflix has had mostly great success with original content, especially regarding TV shows. The movies have been more hit or miss (*ahem* Adam Sandler) and when it comes to horror, it’s been harder to get ⤇