I recently had the conversation, maybe with the nephew, that although books are generally better than movies…. The opposite may be true when it comes to horror. It seems to be easier to deliver scares on film than it is on the printed page. I think what brought the discussion on is that I had recently read The Haunting of Hill House by Shirley Jackson. Yes, a classic, but not as scarey as the black and white film from I think the late 50’s (but much better than the disastrous 90’s remake). One exception for me would be The Shining – the novel’s supernatural ending is far better than watching Jack walk around the house with an ax for what seems to be an hour and a half. So I thought I would recommend three recent titles that may not keep you awake at night, but nevertheless deliver enough chills to qualify as good horror reads. 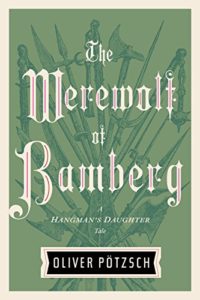 My first is The Werewolf of Bamberg by Oliver Pötzsch. The werewolf, or better yet, wolf man, has been my favorite monster since Scooby Do’s Saturday morning werewolf episode in the 70’s (You know, the one where the wolf man in the green shirt and blue jeans chases the whole crew around for half an hour). So… this title “literally” jumped off the shelf into my hands as I walked around a small bookshop in the suburbs. Apparently this chunky novel is part of a “Hangman’s Daughter” series of books that I wasn’t aware of until that afternoon. The story is set in Bavaria in the late 1600’s, which is a great setting for a werewolf story because most of the people in the story believe in werewolves! The author does a great job playing hide and seek with the clues and the reader cannot be sure if the supernatural beast is real or imagined.

The characters are terrific and even the two hangman brothers are oddly likeable. So although the novel won’t have you checking the closet before you turn off the lights, it does provide some descriptions and attacks by the monster that can be quite scarey and should please horror fans.

My second offering is Last Rituals by Yrsa Sigurdardottir. Yrsa is a hot new Icelandic Crime/Mystery/Horror writer that my wife and I discovered this past summer while vacationing in Reykjavik. I have read three of her novels, and this one is the first in her series featuring Thora, her lawyer/investigator star. The Icelanders love spooky ghost stories and this one features witchcraft. It is both gruesome and engaging, and it grabbed me from the first page. Thora is highly likeable and at times funny, a tough trick to pull off when investigating dead bodies carved with witchcraft symbols. If you are at all familiar with or interested in Iceland, you will enjoy her scenic descriptions. She also has written a stand-alone ghost story that has come highly recommended to me. More on that another time.

Finally I recommend The Doll-Master and Other Tales of Terror by the masterful Joyce Carol Oates. The prose is perfect and these superbly crafted stories reveal a writer at the peak of her formidable powers. Of course Joyce Carol Oates needs no intro as she has been writing better than most for most of her career. This collection does not disappoint and contains two stories- one about a husband and wife on vacation while secretly seeking to destroy each other, and the title story about a madman and his unusual doll collection – that are two of the best short stories I have ever read.

About Jim Teggelaar 3 Articles
Interested in submitting a review or editorial? Have a project to promote? Click on the 'About' page and send us a message, we’d love to hear from you!

Stephen King is an undisputed master of horror. With book sales exceeding 350 million copies, his written words have been adapted for film, television, comics, and the stage more times that I care to count. ⤇

In The Court Of Stephen King: Salem’s Lot

Salem’s Lot is where Stephen King becomes Stephen King. The master of horror. A man who can take a small town and make you feel as if you are living in it. The tone, the ⤇

I Remember You, by Yrsa Sigurdardottir (2012)

I have to confess I have not read a ton of horror. OK, I have probably read more horror than the average reader, but still not a ton. I tend to go more for the ⤇