It’s been ten years this month since the release of acclaimed slasher mockumentary Behind the Mask: The Rise of Leslie Vernon. The horror-comedy about an aspiring serial killer beautifully plays homage to the slasher sub-genre and even features performances from veterans Robert Englund, Zelda Rubinstein, and Kane Hodder. In the decade since its release, writer/director Scott Glosserman and his team have been struggling to find studio support for a sequel titled Before the Mask: The Return of Leslie Vernon. Robert Englund recently broke down the proposed premise in an interview with Rue Morgue: 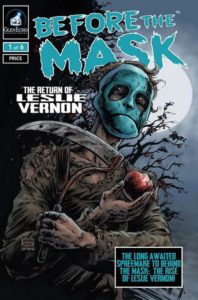 “Each of the original characters from Behind the Mask is hired as a technical adviser for a Hollywood movie about Leslie Vernon. They are brought in to aid the actors who are playing them, so there’s an actor playing me, there’s an actor playing Angela, and so forth. We all know the HBO making-of style, and in Before the Mask, that is an aider and abetter to get us into the movie within the movie within the movie on Leslie Vernon. There are literally scenes of a documentary film crew on the set of the film, shooting the doppelgangers sitting around talking and being awkward. It’s such a great hook.”

In an effort to generate awareness and prove the concept’s potential, the team has decided to release an eight-issue comic book adaptation of the script illustrated by well-known horror artist Nathan Thomas Milliner. To cover the cost of the first three issues, an Indiegogo campaign has been launched with an $18,000 goal. Utilizing the hype of the original film’s 10th anniversary, the campaign has already raised 80% of its goal in just under two weeks.

Along with copies of the first three issues, the campaign has several other cool perks available including posters, t-shirts, thumbnail sketches, and autographs from members of the cast. Check out the campaign here.

While the Alien film franchise continues to expand, so does its comic book counterpart. Published by Dark Horse Comics, Aliens: Dead Orbit is the latest series crafting a story around Xenomorphs and the doomed space ⤇

The legendary Robert Englund is back in Robert Kurtzman’s makeup chair for the full Freddy Krueger treatment in the new documentary Nightmares In The Makeup Chair. For the first time ever fans will get an ⤇

Quiz: How Much Do You Know About A Nightmare on Elm Street?

In 1984, Wes Craven released A Nightmare on Elm Street and changed horror culture forever. Freddy Krueger has become an icon, appearing in eight films and a TV series, but the original film is more ⤇