Let me start this review by saying that this is THE greatest book trilogy I have ever read. I will write about the next two parts soon. If you’re on the fence about diving into the world of audiobooks, this is the place to start. The narrator, Stephen R. Thorne, is fantastic. His enthusiasm, his voices and his clear understanding of the madness that is this book series, creates a one-of-a-kind listening experience.

This debut novel follows John Cheese and Dave, lifelong friends who’ve gained web popularity for dealing with paranormal activities in an undisclosed Midwestern city. Dave meets up with a reporter named Arnie, and this book is his recollection of his story being dictated to Arnie.

It all starts months prior, at a big kegger that John’s band is playing at. Dave meets a man with a fake Jamaican accent at the party, who seemingly can tell the future and read thoughts. He claims his powers come from this inky black drug called ‘soy sauce’, which John decides to take. 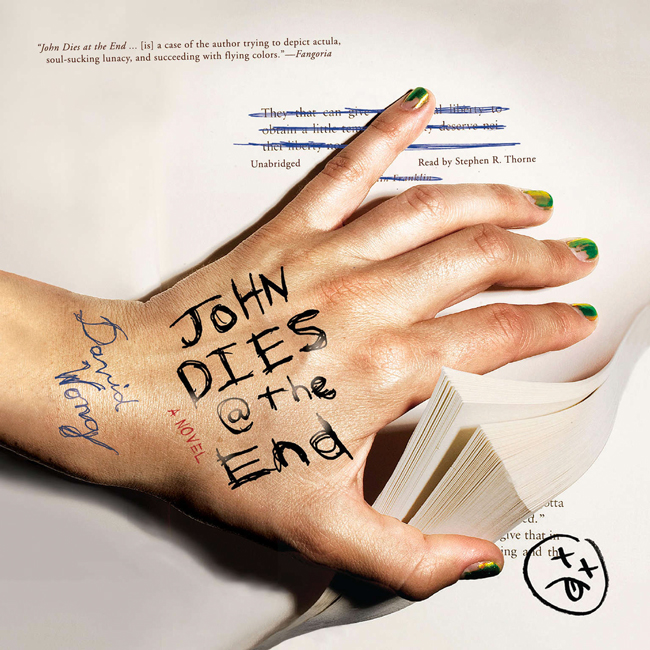 Later that night, John calls Dave, apparently on a bad trip, talking about monsters in his apartment. Dave goes to pick him up and takes him to a Denny’s to try to piece together John’s story. While sitting there, Dave gets a call on his cell. When he picks up, it is a panicked John on the phone. John, who is sitting across the booth from him, is clearly not on the other end of the line.

Dave brushes it off and tries to take John home, but he accidentally injects himself with some soy sauce that John still had on him. Now, both start to see things that they couldn’t see before.

It would be nearly impossible to write out an accurate enough summary of this novel, as it takes so many twists and turns and is full of alternate storylines. The novel was inspired by a blog series that David Wong, real name Jason Pargin, once wrote about an outlandish small city. Although this book goes all over the map, there is a method to the madness that sucks you in and doesn’t let go. There are surely horror elements, as we have the walking dead, monsters, murder, ghosts and exorcisms. The main appeal of this book however, is it’s humor, which blends all of these elements with superbly exaggerated descriptions, dick jokes and perfect buddy cop-esque dialogue.

Give this book a listen and take a journey with these two as they outrun the determined Detective Appleton, form an unlikely bond with the one-handed girl they call the ‘sea cucumber’, and try to separate fact from fiction, hallucinations from alternate realities. Listen as they battle the reality-warping, time traveling shadow men. Raise your eyebrows in confusion as John actually dies in the early parts of the book, yet continues to kick ass. And when all is said and done, immediately seek out the sequels and the great movie adaptation directed by Don Coscarelli. Because honestly, who but the man behind the strange Phantasm movies could possibly make this into a film?

John Dies at the End is available for download from Audible, Amazon, and iTunes.

Fears For Ears: The Mall by S.L. Grey

Welcome to Fears For Ears, a new series at Wolfbane Blooms dedicated to reviewing the best of audio horror. S.L. Grey is actually a combination of two authors: Louis Greenberg and Sarah Lotz. The book ⤇

Welcome to Fears For Ears, a new series at Wolfbane Blooms dedicated to reviewing the best of audio horror. This novel is very reminiscent of H.G. Wells’ The Island of Dr. Moreau, but updated to more modern times. ⤇