As we continue with our weekly reviews of the classic Universal Mummy films leading up to the release of The Mummy on June 9th, we’re taking a look at The Mummy’s Tomb from 1942. As far as the black and white mummy films are concerned, this one feels the most Universal to me. It has all the classic ingredients that a Universal horror film had back then: graveyards, mobs, monsters carrying girls away, houses burning down, Lon Chaney, Jr., so on and so forth. The question is, though, does all of this really make for a good mummy movie?

The movie begins, innocently enough, with a recap of The Mummy’s Hand. However, with this film being as short as it is (right at one hour) you really don’t have much time to fool around with exposition. That being said, the first 10 minutes are spent with an older Steve Banning (our hero from the last film) re-hashing the events from the previous film in its entirety. Then we cut over to a dying Andoheb (priest of Karnak) who spends another 5 minutes regaling us and his Egyptian protégé, Mehemet Bey, with the story of Kharis and his instructions-for-use with the tana leaves. There you have it, 15 minutes of a 60 minute film wasted by telling us stuff that we already know.

Long story short, Mehemet is sent to America with the mummy of Kharis to exact revenge on those who dared to desecrate the tomb of Princess Ananka in the previous movie. It has been 30 years since Steve Banning, Babe Jensen and Marta had their adventures in the desert; they have since moved back to America, made their fortunes with the plunder from Ananka’s tomb and sired children who are now grown. Now Kharis is back to wreck it all at the behest of the cult of Karnak.

This is where the movie starts to derail from the formulaic plot we would expect from a film about mummies; there is no motivation for the monster in this movie outside of the fact that he is little more than a puppet for these priests of Karnak. In the last movie, Kharis was a least protecting the tomb of the woman he loved along with the priests who are the only ones able to control him. This time, however, the plot is more about the priests exacting revenge using Kharis as a tool for doing so. You could replace Kharis with a werewolf and it wouldn’t make a bit of difference. 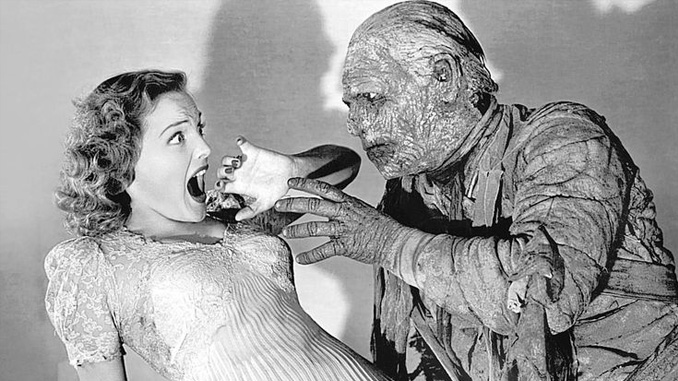 Mehemet arrives in America and takes up the open position of a graveyard caretaker because Universal loves its graveyard sets. This one, in particular, is very nicely done; it’s foggy and unkempt in certain spots and is one of the nicer graveyard sets I’ve seen in a Universal picture. Mehemet stores Kharis in one of the crypts and sends him out on nightly missions to kill Banning and his accomplices. The shots of Kharis walking around the countryside at night are very well done, it’s windy and the images of a mummy knocking down a stockade fence in order to get through are oddly satisfying for some reason. Maybe it’s the concept of such an ancient creature walking around in a modern day America or something, but I really like Kharis’ nightly strolls.

One-by-one the older cast members are killed off; Steve Banning is killed while getting ready for bed, Babe is killed because he can’t outrun a lumbering mummy and Marta died offscreen between the two films. At this point the film becomes a film-noir whodunit. Coroners are stumped as to who the culprit is behind these murders, the only clue they are given is a grayish dust left on the throats of the victims. A professor friend of John Banning (Steve’s son), alerts him that the dust left on the throats of the victims came from a mummy because that is what a logical mind would check for first. With this information, John sets off in search of the mummy who killed his father.

While all of this is going on, Mehemet is lurking around and stealthily watching John and his fiancée, Isobel, from the bushes (you read that correctly). Concluding that Isobel belongs with him instead of John, Mehemet commands Kharis to kidnap the girl and bring her to be his bride. Now I know very little about Egyptian dating customs and even less about romance, but this doesn’t seem like the best way to win a woman’s heart and sounds a little bit too much like abduction and enslavement for my liking. Morality aside, Kharis kidnaps Isobel and brings her to the graveyard where she is held captive by Mehemet “you-will-learn-to-love-me” Bey. 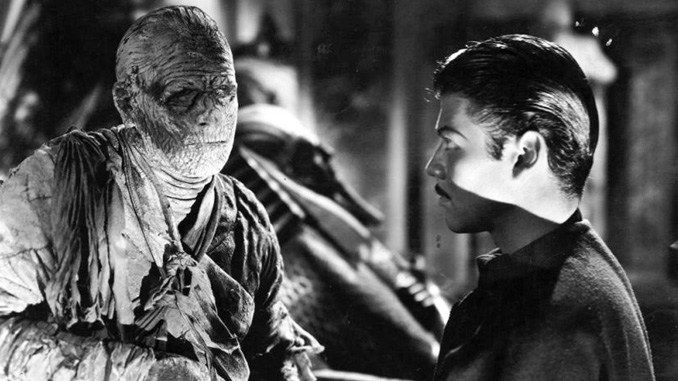 Meanwhile, John has concluded that the Egyptian Mehemet who has recently taken the position as caretaker at the graveyard is the culprit behind these mummy attacks and, since this is 1940’s and racial profiling hasn’t been invented yet, gathers a torch-wielding mob. From here it’s your basic Universal third act: mob shows up, monster runs carrying girl, mob chases monster into house, girl is dropped for some reason, house is burned down, monster dies and movie ends.

Explaining what makes a mummy movie good isn’t an easy thing to do; of course you have the fundamentals of a man condemned to death for offending the gods, brought back to life in the modern world, exacting revenge and seeking out a love lost to them ages ago. But when you take that formula and deviate from it to the point that this movie does, you are left with just a basic monster movie that really has nothing to make it unique or stand out from any other monster movie at the time. If you were to cut out all the scenes with Kharis in this movie and sub in any other monster, you would essentially get the exact same movie.

For what it’s worth, this is actually an enjoyable movie and really is my favorite of the Kharis movies. For one the movie has Lon Chaney, Jr. in the titular role of the mummy. Also, as cliché as the whole basic monster movie plot is at this point, I like seeing it in this film. Sometimes there is a certain level of comfort in watching a tale that’s already been told a million times. There are a lot of iconic images that linger with you long after the credits have rolled, the image of the mummy’s shadow falling over a young couple in their car is just great. Lastly, it’s short and to the point, just like this review should have been.

Shortly after it premiered at the Roxy Theatre in New York on February 12, 1931, Dracula became Universal’s largest release of the year and ushered in a new era of horror not only for the ⤇

Quiz: How Much Do You Know About The Wolf Man?

75 years ago on December 12, 1941, Universal’s The Wolf Man was released in theaters, turning Lon Chaney, Jr into an icon and creating a lasting legacy felt throughout the countless werewolf films of the last several decades. ⤇