Last week I bought one of those 50-packs of movies for $12.00 which you see in a lot of DVD stores on the bargain rack. You know, the kind that displays a really recognizable movie on the front, but then you buy it and find that the 49 others in the case are a lot of public domain garbage. The particular one I chose boasted of offering the buyer “50 Horror Classics”. The cover displayed an image of Lon Chaney in full Phantom of the Opera makeup, which is what immediately grabbed my attention. Upon inspection of the back of the case I noticed that not only was the aforementioned Phantom of the Opera available, but also such horror classics as Nosferatu, Night of the Living Dead, House on Haunted Hill and Metropolis. There were a few others which I was familiar with, but in the end I noticed there were around 30 movies which I had not only never seen, but had never even heard of.

After doing some quick calculations in my head I realized that each unseen horror classic would only cost me about $0.50; a bargain that could not be passed up. After giving a few of these a watch I started to realize that I may have been ripped off by about $0.49 each. It turns out that a good portion of these movies were not only mislabeled as classics, but barely qualified as movies. However, there was one that ended up being flat out charming: The Giant Gila Monster. The title alone grabbed my attention as I have always liked those old giant monster movies which were so prevalent during the 1950’s. Classics like Them!, It Came from Beneath the Sea and 20 Million Miles to Earth were extremely enjoyable with their fantastic use of stop-motion and other practical effects. I figured that perhaps The Giant Gila Monster may have somehow eluded my radar all these years and I may have a real undiscovered classic on my hands. While I wasn’t exactly disappointed, I wasn’t really blown away either. 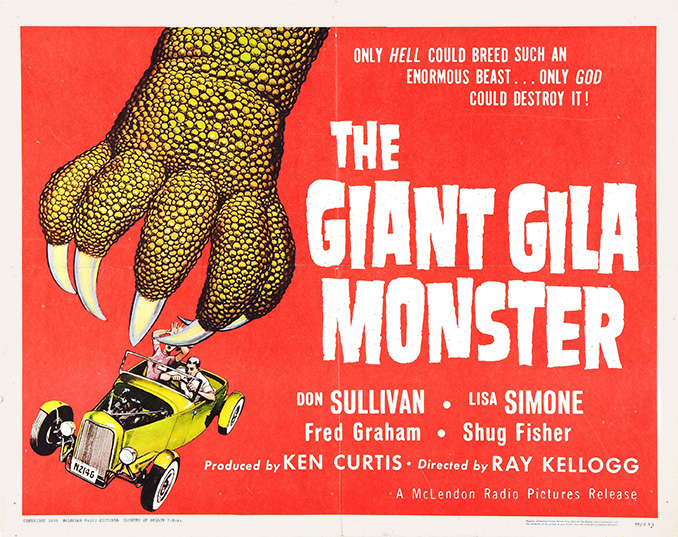 The film opens by introducing the viewer, via poorly recorded voice-over, to the desolate and unexplored wastelands of Texas where reptiles are able to grow to unknown proportions. The film then wastes no time in putting us right in the middle of the action by killing off an unnamed couple who were parked in the middle of said wasteland. Their car is attacked by an unseen creature who pushes them off the road and into a ravine. The only glimpse we see of the creature is a clawed foot as it steps onto the camera.

After a title roll we see the main characters of the film hanging out at the local malt shop: a group of hot-rodding teenagers who apparently like to race cars and dance to barely audible music. I have to mention here that the audio quality of this film is deplorable; the viewer can hardly hear what is being said sometimes and the music is a horrible mash of white noise. With the exception of the main score which would be at home in any horror movie from the ’50s. I should also mention that this movie seems to be very aware that it was made in the ’50s; it tries to insert every trope from that era that it can. With all the references to drive-in theaters and hot-rod cars, one would think the filmmakers were intentionally making a time capsule movie that grandfathers would be able to sit down and reminisce over with their grandchildren someday.

We are quickly introduced to the leader of the hot-rod gang, Chase Winstead, as he comes to the malt shop to inquire as to whether or not anyone has heard from Pat and Liz. It’s implied that Pat and Liz are the unnamed couple who were killed in the film’s intro. Operating under the assumption that they have run off together to elope the gang decides to jump into their cars and go to a drive-in, a completely reasonable reaction to a missing person’s case. Herein we have the premise for the movie: a couple has gone missing and the town must band together to find out what happened to them.

The gang is assisted by the kindly Sheriff Jeff who has been tasked by Pat’s father to find out what happened to the couple. Throughout the investigation, Chase, who operates the only two truck in town, and Sheriff Jeff keep finding vehicles which have been pushed off the road with no sign of the drivers. Essentially, anyone who drives, walks or hitchhikes along this stretch of highway runs the risk of being eaten by the giant gila monster. The monster is finally shown about twenty minutes into the movie and with absolutely no pomp or circumstance as a regular sized beaded lizard being filmed on a miniature set.

That’s what allows this film to be lost among other giant monster movies of the 1950’s; while some of the more memorable ones relied on stop-motion animation to present fantastical creatures in a unique and memorable medium, a lot of the cheaper and forgettable ones, like this one, just filmed a real-life creature on a set of miniatures. There are dozens of movies like this that simply feature normal animals that have somehow become gigantic in size, and it almost always has to do with exposure to radiation. Why radiation? Because it was an easy scapegoat which 1950’s America had little to no knowledge about other than it often being a byproduct of a nuclear explosion. In that sense, it was easy for writers to use it as a convenient plot device to make everyday animals gigantic in size. This is where this movie stands out; there is no explanation for the gigantic stature of the gila monster other than the fact that it grew up in an uninhabited part of Texas. It’s the mystery of the creature’s origins (or bad script writing) that makes this movie one of the forgotten classics of ’50s horror.

Back to the movie, there is a severe lag during almost the entire second act where the gang and Sheriff Jeff investigate the disappearance of, not only Pat and Liz, but also several other townsfolk who have suddenly turned up missing. Meanwhile there’s a subplot regarding Chase needing to raise money for his sister’s leg braces. Furthermore, it turns out that Chase is a gifted musician who specializes in music that sounds like the boom mic operator fell asleep on the job. Combining these two elements, the movie teases that Chase may actually utilize his talents to fund his sister’s medical expenses and help raise his family out of debt, but nothing ever really comes of it and we’re left with a gaping plot-hole that really had no place in a monster movie in the first place. 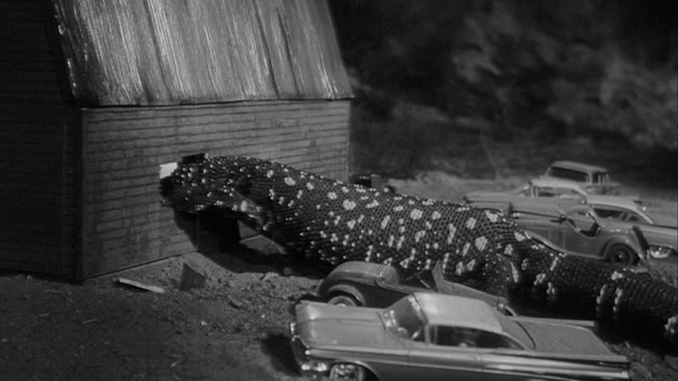 Things culminate when the titular monster causes a train to derail, killing most of the passengers. Some of the survivors report seeing a monster, which leads the Sheriff to ask Chase to keep an eye out for giant lizards. Apparently Chase has been unwittingly deputized into this case since he is the only person that the Sheriff has any sort of meaningful dialogue with throughout the entirety of the movie. The town congregates for a sock hop inside a barn (remember that we’re in Texas) which is promptly crashed by the giant gila monster. The lizard literally crashes through a wall causing those gathered to scatter. Wasting none of the viewers time, Chase loads his car up with nitroglycerin (which he just happened to have lying around) drives his hot-rod straight at the beast and just before impact jumps out of the car. The driver-less, nitroglycerin-laden car plows straight into the gila monster, killing it and ending the movie on a high note.

Overall, this isn’t a bad movie and is actually quite enjoyable at times. There are several lame attempts at humor and an irrelevant subplot that doesn’t really add anything to the overall story. However, there are a number of redeeming qualities; namely the practical effects (as cheesy as they are) and an awesome score that sounds atypical of a 1950’s horror movie. If you can overlook the horrible audio quality and some of the other aforementioned flaws, you will find a charming low-budget monster movie. The film offers the viewer every ounce of wholesome 1950’s Americana that it can muster: hot-rodding cars with white-walled tires, drive-in theaters, malt shops, sock hops and more ’50s slang than you can shake a stick at, which has the potential to make it very nostalgic to anyone who grew up in that era. Out of all the movies available to me in my 50-pack of horror classics, I must say that this one was well worth the $0.50 this film equated to.