There sure are a lot of shark movies. Most are shameless cash grabs or a mindless excuse to show skin and gore. Since 1975, sharks and similar sea beasts have wreaked havoc on the big screen and, unfortunately, the small screen. In a subgenre with enough movies to fill an ocean, almost all of them are the garbage sinking to the bottom. Fortunately, when the movie is good, it’s an exciting experience that’ll fill the audience with dread in the best way.

The ocean is a terrifying place filled with monsters that make for great stories, but how the story is told can make or break a film. The entires on this list show that the best shark movies got the story right, despite that the effects are never quite there. Whether it’s the rubbery, jowly look of Bruce in Jaws, or the cartoonish CGI in Sharknado, the shark’s greatest asset is not being seen. When coupled with interesting characters, the constant threat of a monster makes these shark movies so great and keeps audiences in the theater and out of the water.

Blue Water, White Death is one of the more significant entries on this list. Although it’s nearly 50 years old, it remains one of the best documentaries on the great white. Boasting some of the first images of the great white on film, it was so renowned at the time that Spielberg sought the talents of the filmmakers to shoot underwater scenes on the real shark in Jaws. The technology may add to the film feeling dated, but the star remains timeless and terrifying. Pair it with the 2006 documentary Sharkwater to see both sides of the great white.

Arguably, Jaws is the best shark movie, and looks like it will remain at the top for the foreseeable future. Spielberg created a classic (his first of many) by taking a B-movie premise and turning it into a blockbuster film. The 1975 classic that spawned countless ripoffs and worked its way into pop culture, set a high bar for every shark movie that followed. It holds that rare honor of being a film that’s better than the book it was based on. Spielberg knew to make it as tight as possible, focusing on the characters while this mostly unseen monster lurks just beneath the surface. No shark film since has been quite able to capture that magic.

The most ridiculous movie on the list is also one of the most fun. The sharks that a research team are using as test subjects become hyper-intelligent, flood an ocean facility, and turn on the researchers. With a cast that includes L.L. Cool J and Samuel L. Jackson chewing the scenery, it doesn’t really matter that the sharks are silly, intelligent, and CGI. It may not have been critically loved on release, but Deep Blue Sea is now remembered fondly. The effects may not hold up, but it’s as fun and enjoyable today as it was nearly 20 years ago. 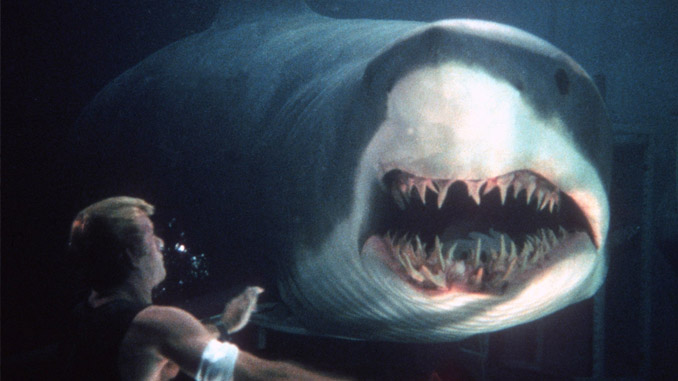 Far from the giant spectacle that most monster movies are, Open Water went for a realistic, almost documentary feel that made for a bare-bones simple film. A couple left by their scuba diving group are stranded in the ocean with sharks closing in. It’s a quiet, slow film, but intense nonetheless. Based on true events, Open Water is more of a psychological horror about the ocean than it is about sharks. The horror feels very real as the entire 79 minute run time is spent in the ocean with our two main characters.

When The Shallows came out, I was hopeful. Maybe this would be the movie to capture what Spielberg had with Jaws. While it comes close, and does a decent job of building tension, the suffers from bad CGI. When we first see the shark, it’s almost laughable and is ultimately the film’s biggest flaw. Blake Lively carries the story and keeps us interested enough and hopeful that the shark can be defeated. It’s a tight, simple, and fun film that keeps the legacy of the shark alive.

47 Meters Down almost made this list, but isn’t quite there. It’s an interesting premise, but the execution is all over the place. What makes it interesting is that these two girls trapped at the bottom of the ocean have more to deal with than sharks. The use of Matthew Modine’s voice helps elevate the film, but the bad CGI and poorly attempted character building fall flat. The movie shines when it’s taking advantage of the claustrophobic premise. It’s an admirable attempt, but unfortunately it falls just short of wonderful.

The power of film is interesting. Certain stories can strike the right chord within someone and will stay with that person to the point where they regularly revisit the film. It becomes a favorite, and ⤇

Quiz: How Much Do You Know About Jaws?

Steven Spielberg burst into the public eye with 1975’s Jaws. It became the first blockbuster, and made stars of Roy Scheider, Richard Dreyfuss, and Robert Shaw. Although it has been 42 years, the films stills ⤇