I picked up Jeff Vandermeer’s novel Annihilation at the end of 2014, after little more than a suggestion from Amazon’s algorithm, and instantly fell in love. The novel (and it’s subsequent sequels in the Southern Reach Trilogy) enthralled me, with its fever-dream-like portrait of ecological disaster and incomprehensible horror. So when it was announced that Ex Machina’s Alex Garland would be helming its big screen adaptation, I was beyond excited. I obsessively followed the film’s production, and, in the weeks leading up to the release, I made my fourth pass through the novel so that it would be fresh and ready in my mind for comparison to what I saw on screen.

But having seen the film this past week, I won’t be making the comparisons I thought I might, as Annihilation the film has very little in common with Annihilation the book. If it weren’t for the distorted wilderness of Area X, a team of female scientists, and a few shared plot points early on, you might have trouble recognizing that the two are related at all. No hypnosis, no strangling fruit, no tunnel (tower), no crawler, and no real Ghost Bird, even, appear in the film. Because of how different the novel and the film are at their very core, I think that trying to draw extensive comparisons would be a disservice to both.

The one difference that I think is important to understanding what Garland’s Annihilation is about is thematic. Both the novel and the film are fundamentally about change. The principal setting, Area X, is a place in constant flux—it’s flora and fauna being changed by a force beyond understanding. And our protagonist, The Biologist/Lena (Natalie Portman), goes through a metamorphosis of her own in Area X, mentally and physically.

In the novel, this change is accomplished through colonization. The Biologist’s physical transformations are infectious and violent, revolutionizing her body from the inside out, just as ideas lay roots in her mind and slowly take over. In the film, however, change is a process of reflection and refraction. It seems to suggest that as much as the characters are being affected by The Shimmer, they’re leaving their own marks back on Area X. This reflective change is largely shown through external cues, like Lena subtly developing Anya’s (Gina Rodriguez) tattoo on her own arm over the course of the film.

So, differences aside, how does Annihilation work as a film? Well, I would be lying if I said it didn’t have flaws. Because it certainly does.

The first act of the film drags hard. Those opening 30-plus minutes of the movie end up not being much more than a convoluted mechanism to get Natalie Portman’s Lena into the action. This is made worse by the fact that neither she, nor Oscar Isaac get much to work with during these scenes. Isaac spends most of his screen time in this act either in a coma or playing a husk of a man. Sprinkled in are a few flashbacks in which we see the two before their lives become irreversibly affected by Area X, and the chemistry between them is moving, if fleeting.

Even as the film kicks into full gear, there is still a disheartening amount of bad dialogue and exposition delivered by talented actors. Tessa Thompson’s character seemingly only exists to tell the audience exactly what is going on: “If you sequenced these plants they’d have human Hox genes,” “The Shimmer is refracting DNA. Animal DNA, Plant DNA, Human DNA.”

Tuva Novotny’s character of the surveyor has an extended monologue about how all of the women on the expedition are damaged. Even Jennifer Jason Leigh’s character, a doctor of psychology, seems not to understand basic biological processes and asks cringe-inducing questions about the nature of the cell.

The things that Annihilation does right, however, are truly incredible. The film dishes up some of the most disturbing and inventive body horror I’ve ever seen — such as a corpse growing up the side of a wall like mold, or Oscar Isaac’s Kane grinning maniacally into a camera while holding the writhing entrails of his dying crew mate. And, of course, there is the bear scene. I won’t give too much away, but it manages combines to combine dread, anguish, and violence into a sequence that is still reverberating waves of unease through my body.

But these horrors are always paired alongside—and sometimes masked in—astonishing beauty. From the moment the crew begins their journey into Area X, the film becomes a showcase of hyper-saturated set pieces, each teeming with explosions of bizarre flora in rainbows of color. There is shot after shot of psychedelic lichen or translucent fish that are jaw-droppingly beautiful, but each one is held long enough for you to begin to feel the subtle horror in each.

A perfect example is a scene in which Lena stumbles upon two deer in a clearing, while searching for a lost member of the expedition. Immediately, you recognize they are not normal deer and have beautiful tree branches for for antlers. Everything is still for a moment, and you can see that, in fact, one of the deer has part of it’s skull exposed. And then, as the deer run off into the forest, the uncanniness becomes clearer as the two move in machine-like synchronicity.

The stunning visuals are certainly one of the primary selling points for seeing Annihilation on a big screen, but after leaving the theater, I was sure that the sound design and score demanded a sonic experience that only a cinema can provide. For one, the film makes sound design central to its horror in a way I feel is underutilized in the genre. There were moments when, amidst some terrifying imagery, the accompanying noises were what unsettled me the most (again, shout out to the bear scene).

For much of the film’s runtime, Ben Salisbury and Geoff Barrow’s score lays in wait, with standard ominous and atmospheric orchestral accompaniment. But in the film’s climax, it becomes a different beast entirely. As Lena reaches into the psychedelic heart of Area X, a switch is flipped and the soundtrack transforms into waves of layered, droning synths, with enough gravity to crush you into your seat. That may have been one of the loudest, most physical moments of music in film I’ve ever experienced, and I immediately wanted to go through it again.

And now, we come back to different. There are things about the Annihilation that I just don’t know how to feel about, because of how different they are. The aforementioned climax of the film is a prime example. If you were to make a list of all the ways a horror or sci-fi movie could approach its apex, I can pretty much guarantee that “interpretive dance battle” would never be on that list. But that’s what exactly Annihilation does in that moment.

After a hearty dose of psychedelia with bright lights and kaleidoscoping colors straight out of 2001: A Space Odyssey, Lena is forced to confront the the film’s themes of reflection and self-destruction manifested in her own faceless doppelganger mirroring her every move. It’s a sequence that is uncomfortable and emotionally charged, symbolic and brutal, exhausting and relentlessly weird, but most of all, different. And regardless of whether or not I think that’s what I wanted in a finale, I find it hard to deny that it’s made me think about it, over and over again. 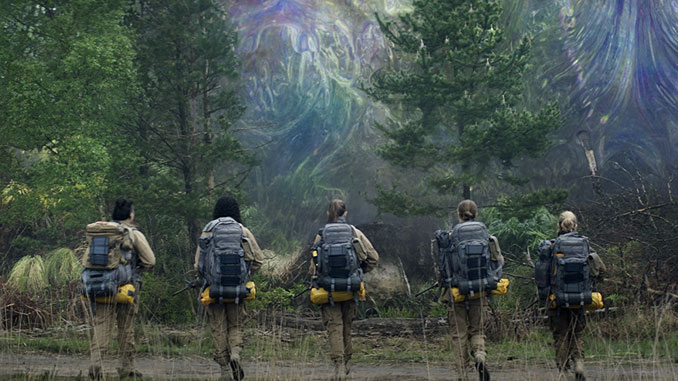 About Sawyer Hildebrandt 3 Articles
A .jpg of a beloved cartoon character with human mouths for eyes, screaming eternally. @hildesaw on twitter